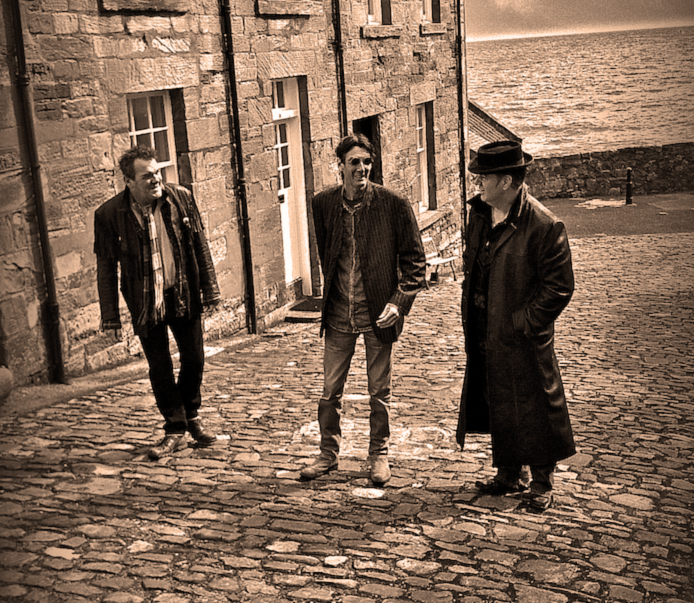 Drever McGuire Young (DMY) came together in early 2012 and released two albums: “Gifts” and “The Return of The Shoestring Orchestra”. Ivan had worked with & known Frankie McGuire over a number of years and met Rich Young at a folk club in Scotland where they played together for the first time. Their music is an exciting & eclectic sound that encompasses a huge variety of musical influences from their individual backgrounds. Ivan provides Guitar and Vocals, Frank McGuire is on percussion whistle and vocals and Rich Young plays guitar, keyboards, harmonica accordion and provides additional vocals.

Frankie McGuire: Frankie’s career has covered a wide range of world music .His percussion skills attracted the attention of the legendary Jordi Savall with whom he toured and recorded, playing to tens of thousands of people in Europe, Asia & the States, as well as winning several album awards. He was also an integral part of the iconic Lyra Celtica who blended a wide range of Celtic influences into their music earning them critical acclaim all over the globe. Frankie’s percussion & whistle playing have found him in demand as a session player in a variety of musical genres including folk, blues, jazz classical & gospel. He is equally at home playing to huge crowds in Russia or at a session in an intimate Scottish bar.

Rich Young: Originally from the south of England, Rich is now resident in Scotland. He has played, performed & recorded a hugely diverse range of music. Amongst his credits he lists working with Small Faces/Who drummer Kenney Jones, Eurythmics Dave Stewart, Loudon Wainwright, Dire Straits David Knopfler, & Steve Marriott. He also played on the album ‘That Might Be It Darling’ by  King Creosote. Outside of Drever McGuire Young he plays solo shows and writes music for radio & TV as well as producing & recording music for other artistes.

The band played in Europe, The USA, Russia and the U.K. The two albums feature songs by Ivan as well as contributions by Frankie and Rich.